Caton Signs off in style

Racing at Ockley in Surrey for the last Points of the Season yesterday, Paul Caton needed 17 points to take overall victory in the season - long Mstina series.

He also needed his strongest adversary to finish way down the leader board. Unfortunately, the winning break of 8 contained that rider. Determined to the end though, Paul fought hard: " the break went on lap two of seven and I had to chase like crazy to get onto the back" he recounts.

Once in the front group, he rode conservatively to preserve his energy, waiting for the right moment to make a decisive attack: "I launched at 150m to go just at the bottom of a small rise......I figured that I would get up to speed quicker than the heavier guys and be able to maintain my lead as the road flattened out." Indeed he did, and took a hard - fought win by less than a second.

"It was good to get a win with such a great selection of opponents," he says. "It's a shame about the overall, but in many ways, a win means more on the day." 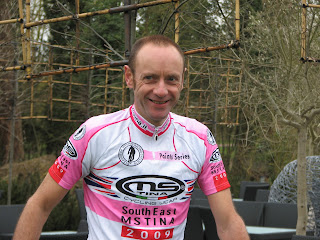 last year's jersey - Paul was denied this season by a handful of points
Posted by TMG Horizon Cycling Team at 08:33 No comments:

Paul took on the UK's best last weekend at possibly the richest time trial in the country when he tackled the Catford Hill Climb.

Held since 1887, this cult event has in recent years attracted a new band of followers from less traditional cycling backgrounds. Believed to be the oldest cycling event in the world, the recent resurgence of cycling seems to have rejuvenated the raucous atmosphere.

Thanks to optimalcadencefilms for their video; Paul makes his appearance around the 24th second.

Posted by TMG Horizon Cycling Team at 11:11 No comments:

by Neil Wass
We've taken our first steps to organising a Road Race for the 2011 season. Details are subject to confirmation, but should not change significantly

We've got a nice trophy being prepared (pic here) but there's lots of work to do and arrangements to confirm. If you can help on the day, email me at cyclingteam@ymail.com - It's going to need a multitude of volunteers.
Posted by TMG Horizon Cycling Team at 20:35 No comments: