End of Season Round Up 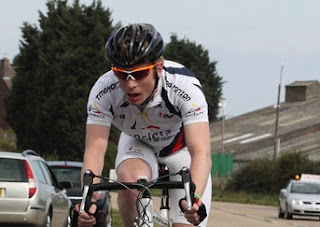 From a standing start last season, Doug has moved on this year and entered a whole new level. At the tender age of 25, he exhibits a maturity way beyond his years. 13 top 10 finishes stand testament to his determination. Perhaps the high point of the season was his 8th place in the Ken Lush Memorial Road Race at Whitwell, where he mixed it with the National Level Teams and secured 8th place as the highest placed 2nd category rider. All riders ahead of him bar one were Elite category.
This season's results have spurred Doug on to greater efforts: "I'm fairly pleased with my improvement this year." he says. "But next year starts now and I'm applying more methodology and structure to my training which I'm hoping will get me my1st cat licence." Having got more than 3 quarters of the way there this season, he's not exactly an outside bet... 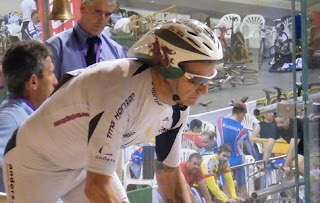 Once again, Dai saved his form for the track and despite his challenges with training whilst working abroad, he managed a national medal in the team pursuit. Having contested the world masters track championships in Portugal, he has enjoyed the experience and is looking forward to another attempt next year. Out of 47points (which took Dai back to thend category), 44 were  achieved after August the 7th! Neil's objective was always to regain his 2nd category licence and he has achieved this, but not without a scramble at the end of the season: "I enjoyed some time abroad and doing some fun events," he says. "My second place in Tuscany was great, but I started to run out of time to get the points. Now I'm 2nd cat again, I will aim to retain this next season and support Doug in the higher category races." 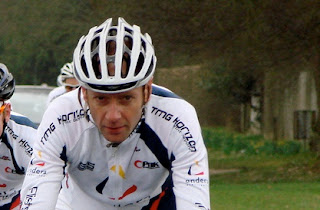 The tally of our 'winningest' rider is not representative of his achievements. He fought hard and long to retain his Mstina champion's jersey and in the end, despite the strongest possible performance in the final race of the season, he lost out by a handful of points to a less successful but more consistent opponent.
Paul's three wins set him up as a man to watch next season.
Sept 9th LVRC Newbury; Oct 3rd LVRC Reading; Oct 17th Festival RC LVRC Finale
Next season, he is considering broadening his reach: "I enjoyed the few BC races I did this year," he says. "And I think it would be fun to see what we can achieve riding as a  team. We may choose some of the longer, higher category races which are safer, more testing and tend to rely less on good fortune than the lower category races. The 3/4s can be a bit of a lottery sometimes, especially with the higher risk of crashes when less experienced riders are in the race."
John Lacey 3 points from 7 events 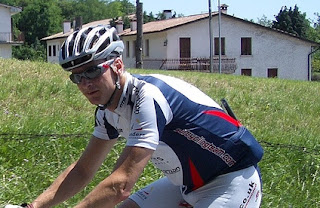 John is looking forward to returning to 3rd category. After a very successful 2009 where he quickly gained his 2nd cat licence, John decided he would just enjoy riding his bike this season, and animated a number of midweek races at Hillingdon, often doing good work for team mates and contributing to their success. He came within hlf a lap of a midweek Elite win at Hillingdon on one occasion which sums up his undoubted talent and general 'have a go' attitude. Next season? He fancies a win...
Posted by TMG Horizon Cycling Team at 17:18 No comments:

﻿﻿﻿﻿﻿﻿ Our number one Welsh rider was in Portugal this week having scored a National Gold in the Team Pursuit. Here's his report

Got back last night after 28 hours driving!!

I qualified for the scratch and points finals (only our age group had heats) and also the sprint which I only entered as I was bored :-) .
﻿ ﻿
The qualification for scratch and points was very competitive, Adrian Adgar won Bronze recently in LVRC champs and he did not get through!!
I was competitive in scratch final, cpl of brits made attacks and we sort of rode as team, no chasing each other, so with 8 to go I attacked and got a decent gap and 3 riders joined me and one rider worked, but 2 kept swinging up so I did 3 turns then had to give up as we would never stay away with 2 riders and 2 passengers with 4 laps to go so that was my lot as the bunch caught us at 35mph!!

In the points we decided to ride as team for any riders who broke. Ian Greenstreet atacked and got a gap, then Courtney Rowe from Wales attacked so we could not chase. When Courtney joined Ian and 4 others I went to front of bunch and did 4 laps on the front so they could lap us ( we did not have GB colours on so no one noticed!) and when riders came past me I sprinted to get between them so after 2 turns I was back on front!!

It worked becuase from holding a 1/2 lap gap, they lapped us within another 5 laps. Then, with 7 to go Courtney asked me to go at front to try to keep pace to stop attacks so I did that and blew completely with 3.5 to go when a scottish rider led him for last 2 laps so he got bronze in a very hard and quality field.

I went much better than I expected and was competitive so happy with that and look forward to next year as I move to 50 age group.

The gold and silver riders were way too strong so none of us would have got gold but due to teamwork got bronze.

The scratch was won easily by a french guy Phillipe Vernier who used to ride for Credit Agricole, I think, very very fast sprinter with endurance!! He celebrated with about 50m to go, the second french guy got silver and he was just as good!!

Glad they got beaten in sprint when they tried to be cocky and lost!!

Starting training for next year in two weeks :-)

Posted by TMG Horizon Cycling Team at 20:09 No comments: