The Kings Arms in Berkhamsted has sponsored the town’s cycle team by way of demonstrating its commitment to the local people and its support of clubs and societies in the area. 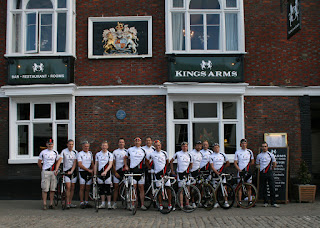 Fortifying its presence in Berkhamsted High Street, the  Kings Arms is proud to sponsor a successful local team, the members of which spend most weekends competing in races around the country. The team will be showcasing their new Kings Arms emblazoned cycle shirts, produced specially in Italy and funded by the Kings Arms, wherever they race or train around the nation.
The team gathered outside the front of the building for an official photoshoot in full force, kitted out in their new shirts and a few celebratory bottles of champagne to reinforce a great team spirit. With the Kings Arms logo splashed on the arms of their shirts, the spectacle even stopped traffic and passers-by as they dominated the centre of Berkhamsted.
With the Kings Arms as an ideal social meeting spot, the team are likely to be making use of the new courtyard area outside this Summer as they hope to revel in post-race winner’s glory.
Read more: http://www.kingsarmshotel.com/news/the-kings-arms-sponsors-local-cycle-team/#ixzz1Lx927rEW
Posted by TMG Horizon Cycling Team at 18:00