Full Podium Sweep for Caton at the Nationals

Following Paul Caton's trip to Manchester for the World Championships he headed off to Newport for the LVRC National Event: "I looked at my Manchester events as a warm up really," he recalls. "I didn't expect to medal but I got closer than I expected and it gave me some excellent pointers for improvement."

The 2 km pursuit was a new event for Caton. Held on Sunday morning, it began with the qualifiers at 9am which decided on time the 4 riders that would make it into the ride off for Gold through to Bronze. "Having never ridden one of these before my strategy was just to go as hard as I could for the 8 laps," says Caton. "Unfortunately I had not warmed up enough so my time was a bit slow but just good enough to get into the ride off for bronze."


The ride off is not so much about time but beating the other rider. Fortunately Caton had some expert assistance from Adrian Trott (Part time GB squad coach) who used the time-honoured method of letting a rider know how they are doing by walking the line. "For the first 4 laps he was walking away from me so I had to give it full gas for the last 4 laps and in the end won the bronze by around 3 seconds. In fact my time was only a few hundred of a second off silver. With a bit more practice I think I can do a lot better at this event."


This is the most straightforward of the track events - a 10km race over 40 laps with the first rider over the line being the winner. Says Caton: "Most riders in the peloton were marking me heavily and every time I tried to escape they brought me back. The race ended up a bit on the slow side and with seemingly little appetite to make it hard by attacking so it was just a question of making sure I was in the right place for the sprint. I found the right rider to follow but was not quite strong enough to get past him on the line so had to settle for 2nd."


First up though, the Points Race on Saturday afternoon which proved to Caton's strongest suit. Held over 15Km or 60 laps with points awarded every 10 laps (5,3,2,1).

The entry of 25 riders included some keen competitors including some other GB riders who had competed at the recent World Track Champs at Manchester 2 weeks ago along with a smattering of ex Wales international squad members.

Caton remembers "As always the first sprint is always hotly contested so I just made sure I was ready for any counter attacks but after the sprint I decided to go on the attack and took 2 other riders with me. We were then joined by 3 others after 4 laps and then another 2 just before the sprint which I won." 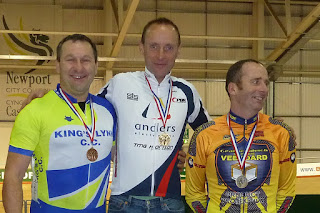 This group effectively became the peloton, holding a consistent gap with Caton injecting much pace: "In each of the sprints I was always in the top three but as the winner was different each time it was easy to build up a points lead." This consistency ultimately netted Caton the gold medal.


By Sunday evening, Caton had a full set of podium medals: "I'm delighted with what I've achieved," he concludes. "It's taken a lot of training and sacrifice to get to this level so to get the payback is marvellous. I can finally award myself a few glasses of wine without feeling guilty. It's going to be a great off-season!"


Fellow team member Neil Wass adds "This caps a great season for Paul. He is our most prolific racer and - hardly surprising - our most consistent performer. He's worked so hard for this and it's richly deserved. We're looking forward to next spring already!"