Double Win in the Millennium Trophy

After keeping things quite hushed last year until Christmas, it's already official that our team has some serious success in the 'season-long' North London Millennium Trophy for 2015.


Devised by Doug Eagger of the Icknield CC, the trophy is based on points for placings in eight sporting course time trials.


Luke has beaten Richard Wood of Arbis Colbert RT to the scratch win and thanks to some great supporting rides from Steve Clarke, Paul Caton and a resurgent Darren Powell, we have, for the first time, clinched the team award. Top work!

Win for Neil at Newbury

The 10 o'clock at Newbury. Sort of. Neil & Paul turned up on Sunday morning for the Newbury Road Club's LVRC Road Race. Neil, typically unprepared, had no idea that the course had a hill in it, but, as he said, "you can waste a lot of time preparing for things that don't happen." er, yes

Neil's AB race was off with a bang and he got straight into the early move which became the mid race break and then failed to be the break that stuck when it was caught after nearly 4 laps. He'd been working hard too: "Simon Brooks and Rowan Horner from St Raphael were working really hard to tow us along and all 4 of us were really pushing but Simon was clearly stronger than the rest of us." Eventually, the main group got working and caught the breakaway, but Brooks had already taken flight. Neil was left to lick his wounds and try to recover.

"I'd been working at my limit really for 4 laps so I was struggling to see what I could do next," he recalls. After almost a lap back in the bunch though, he followed a move by Vince Divine of Finchley up the climb and opened a gap on the bunch of about 10 seconds. Joined by Gianluca Capello of GS Vecchi, the trio got their heads down and headed full tilt for the line. Neil was beaten by Capello and Divine in the sprint but he wasn't downhearted. "I fought hard for that and after 4 laps in the break, I thought that wasn't bad!" he said afterwards.


Meanwhile, in the CD race, Paul made sure he was in the main move of the day, but he too was finding it tough. "It was a tough course with the climb in particular causing difficulties in the peloton. In fact it was at the base of the climb," he says.


With just over two laps to go that the final selection was made with an eight man group of the strongest riders forming over the crest.


The group worked well but with three VC Vecchi team riders there were plenty of attacks and counter attacks as they each tried for a solo victory. "We were pretty wise to this," continues Paul "so they didn't succeed which left it all lined up for an eight man sprint for the win. Unfortunately I let myself get boxed in a bit so only got 3rd. Still not a bad result and starts to cement my 3rd place in the series but I have eyes set on 2nd."

Posted by TMG Horizon Cycling Team at 19:07 No comments:

PBs for Ross and Luke in a very old Race

The Cronomen headed over to Essex yesterday for the Shaftesbury 50.

One of the oldest races on the calendar - it was first run in 1906, it always attracts some of the strongest riders.

It's on the E2 course too - a fast route with plenty of takers so they were up against some top names.

A  stiff wind was not too much of a hindrance and Ross and Luke both got inside the top 10 whilst Tony and Steve got 'comfortably' under the 2 hour mark. 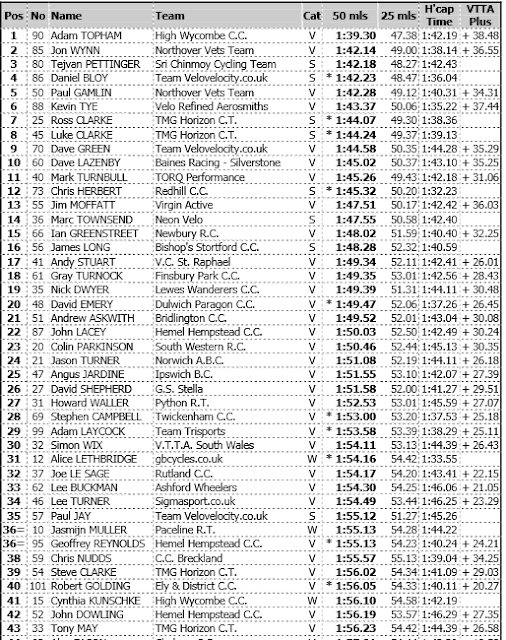 Posted by TMG Horizon Cycling Team at 20:38 No comments:

A little bit of Belgium came to the 5th TMG Horizon Road Race yesterday on the Cublington Circuit near Aylesbury in Buckinghamshire. Local riders put up a great fight but Robert Smail of Belgium - based Tomacc CC showed his superiority with a surge of power on the last lap.

Stephen Orbie of VI Technics was straight into the action, making an early move with Mike Wragg of Arbis Colbert in the opening kilometres and as they crossed the line, a gap of 22 seconds looked to be growing. The front of the bunch was also splintering though, and by the Unicorn Prime on the 2nd lap, Wragg had been substituted by his team mate, Richard Wood with Peter Hitt of VC Meudon joining in to make a gap of 54 seconds.

The third time through Whitchurch and five more riders had joined the move but the gap was shrinking to 29 seconds and by the time they crossed the finish line with 5 to go it was only 22. After a particularly hard phase of racing, there remained only 15 seconds when the race had to briefly neutralised.


With everything back together, hostilities resumed as Will Scott of Bonito Bikes went straight on the offensive on the 5th lap and pulled away to a gap of 40 seconds. It didn't take long for Stephen Orbie to wake up again though and with 2 laps to go, he took the Grand Tour Cookbook Prime leading a powerful looking group up the hill which had absorbed Scott and included two Corley Drops riders.

The gap to the bunch of 1 minute 35 seconds looked solid and held relatively steady on the 7th lap, falling only slightly to 1'20" at the bell. The pressure was on though now and on the last time up the headwind drag to Whitchurch, the break was shedding passengers as the bunch smelt blood and accelerated.

With 5km to go, Robert Smail of Tomacc CC attacked the remainder of the break. With most of the remainder being downhill this seemed a touch foolish but he built a gap of 30 seconds very quickly as the bunch went through Whitchurch, defying the logic that a group will descend faster then a loner.

His high pace continued whilst the remains of the break imploded leaving everyone to fend for themselves. By the finish, Smail had carved out a gap of over a minute to take the win in style. "He made it look easy,"observed one of the spectators. 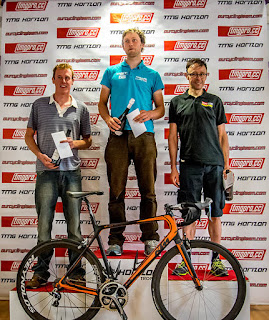 Local pride was intact as Roy Chamberlain of Corley Drops RT proved the best of the rest, surviving the high paced break and managing a small gap before the bunch came in and the Spirit Bikes Team from only 5 miles away managed 2 riders in the Top Ten.

Winner, Robert Smail reflected "It was great to get the win today against some quality opposition. I really enjoyed the race; it was hard, fast and safe." Neil Wass, organiser said "It was a pleasure to put this race on - the riders put on a fantastic show. We know that guys like Robert go to Belgium to get hard races and maximise their opportunities. We started this race because we hope one day they won't need to!"

more pictures (thanks to Paul Burgoine) are here

Posted by TMG Horizon Cycling Team at 17:39 No comments:

Paul wins his own race!

It was a busy weekend for TMG Horizon Cycling Team. Not only did we run our annual BC 160km Road Race on the Cublington Circuit but we also put on three races at Hog Hill as part of the LVRC Toachmin Vets race series. This race was run in conjunction with the Verulam CC who helped provide some of the helpers on the day.

Fortunately Hog Hill is an easy location to run a race so this allowed Paul Caton to also compete in Race 3. To keep things simple all races were run over 1 hour and 1 lap making them more of a criterium than an endurance event although with a steep hill each lap they were still testing races.

Race 1 was for the EFGH age categories with a reasonable turn out of around 30 riders and won by ex-International Rider Bob Downs of Rapha Condor in a solo breakaway.

Race 2 for the AB category riders had around 40 riders take to the line and won again by an International track rider Anthony Wallis of Ciclos Uno again in a long solo breakaway.

Race 3 for the CD age categories was won by ... Paul! He jumped away from the start line to gain 15 seconds very quickly. Soon joined by Colin Roshier, the two worked well together, almost lapping the peloton. Paul proved too strong for Roshier in the final sprint taking the win 'easily' (his words).

Paul reflected afterwards: "The blustery conditions made it ideal for a long breakaway effort although the wind and having to climb that hill every 3 minutes made it hard.! It’s great to be on the podium with two riders that I used to read about and aspired to be like when I was a youngster."
Posted by TMG Horizon Cycling Team at 09:30 No comments:

Neil began today with a pootle out to our most local Road Race Circuit. So close it would be rude not to.

Not to mention that our pals from Equipe Velo had put a lot of work in to stage their race in their first year.

It was on the short Mentmore Circuit which means that you have to climb the Mentmore 'lump' lots of times.Hmmm, as Eugen would say.


A very civilised start was great until the CD race caught and passed the AB race. Interesting. And a challenge for the organisers, which they handled with grace and ease.

Then the attack happened that a number of people expected: Roy Chamberlain of Corley Drops RT and James Fox CC Luton accelerated, and Neil jumped with them, shortly joined by Paul Dring of Echelon Rotor. ABs overtook CDs and status quo. Oh hang on, not quite, the move became a full-blown break. The foursome was going well but Neil was only too aware that Roy and Mr Fox probably had a bit more to burn. " I knew I had to be careful," he recalls."

He wasn't quite careful enough though and with five laps still to go, the more dynamic duo hung back at the foot of the hill and then shot past Neil and Paul.


"I gave it everything I had to try and hang on," says Neil. "But I just didn't have the power." So, what to do? "I would generally have crawled back to the next guy on the road and teamed up," he continues. "But I knew we had a reasonable gap at that point, so I though I would try and make it on my own."

And so he rode the last five laps solo, with Dring squeezing out another solo effort behind him: "It was one of the biggest efforts I've ever done," says Neil. "I definitely found my limit. I did at least get plenty of cheers at the finish. Probably out of sympathy!" He held a 2 minute gap by the finish, for 3rd place and 2nd in the A category, with Dring just holding off the bunch for 4th.


Evidently not quite content with this, Neil hared off home to regroup for the Redbourn Fete Du Velo where he had a bash at the  Masters Race, coming in 5th with John in 10th.

Win! 1-2 for Luke and Ross with team bonus

A great day out for the team yesterday. Luke, Ross and Steve Clarke did the Fenland Clarion 25 and came home with quite a haul.


Luke headed the results with a clear win over... Ross by 1:13 . Ross is getting to grips with fatherhood, so at least he has an excuse for the podium position!

Steve came in quick enough to clinch the team prize;  a great warm day out for the trio.

Full result is here, thanks to VeloUK
Posted by TMG Horizon Cycling Team at 20:09 No comments: